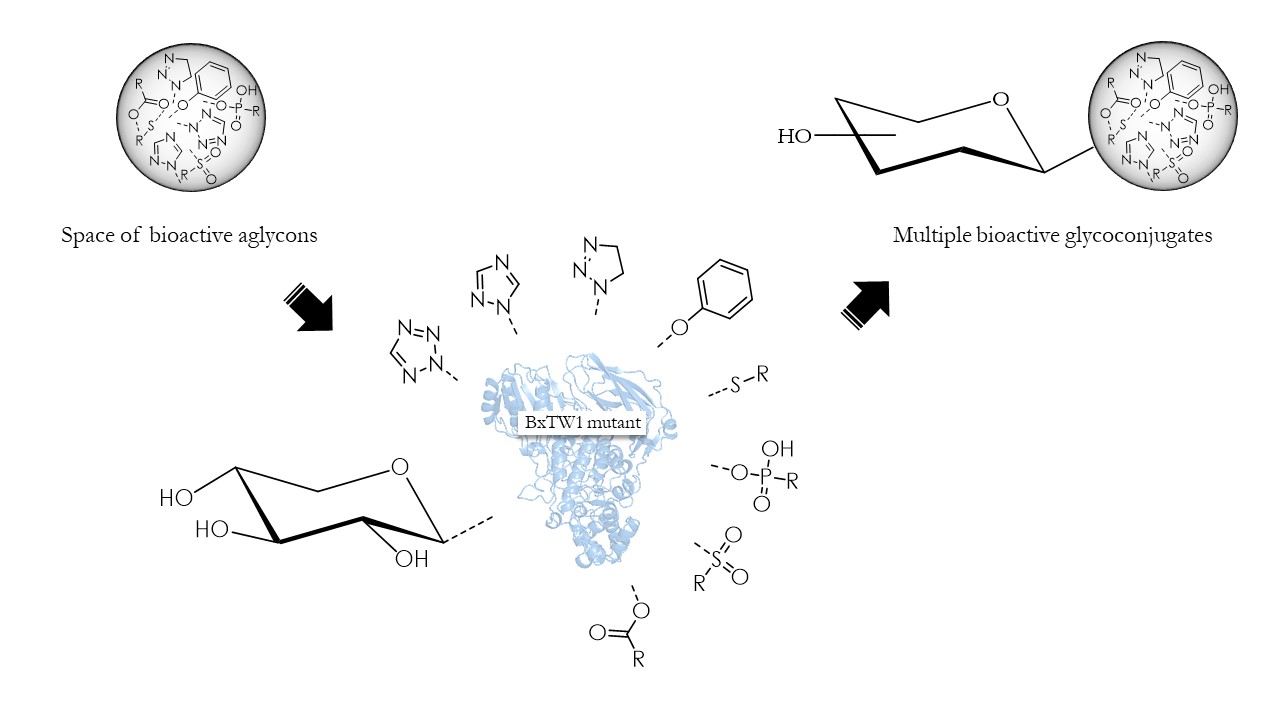 An international team of researchers led by Prof. María Jesús Martínez at Centro de Investigaciones Biológicas Margarita Salas (CIB-CSIC) has identified and engineered a novel enzyme, which is able to catalyze the attachment of a carbohydrate to an unprecedentedly broad range of substrates. This mutant, derived from a fungal glycosidase from Talaromyces amestolkiae, has been described in a recent publication in Nature Communications and the work shows its potential for the sustainable synthesis of multiple glycoconjugates with unexplored biotechnological applications.

Glycosylation, the reaction that allows the addition of a carbohydrate to a bioactive compound, has lately gained interest as a strategy to modify or improve their properties of interest. Conventional synthetic chemistry can catalyze this process, but relying on environmentally-harmful, laborious procedures. Enzymes offer a promising green alternative to carry out this procedure but, unfortunately, their large-scale implementation is still challenged by a series of drawbacks, being one of the most important limitations the narrow range of acceptors that the currently known biocatalysts are able to glycosylate.

Nieto-Domínguez et al. have identified and genetically engineered a fungal glycosidase from Talaromyces amestolkiae, the Beta-xylosidase 1 (BxTW1), which overcomes this problem as the novel mutant enzyme is able to glycosylate a range of acceptor unprecedentedly broad. The novel biocatalyst, produced at CIB, was designed by combining the mechanism of a class of glycosidase mutants, described by Prof. Stephen Withers (University of British Columbia), with the particular structural features of the glycosyl hydrolase family to which BxTW1 belongs. The plethora of novel glycosylated products has been characterized (and structurally confirmed) using Nuclear Magnetic Resonance by the group of NMR and Molecular Recognition led by Dr. Javier Cañada at CIB-CSIC.

The result of the work was a biocatalyst capable of using a wide variety of acceptors including plant antioxidants, short fatty acids, thiols, selenols, triazoles, or organophosphorus compounds. This substrate diversity makes possible the sustainable synthesis of a virtually unlimited series of novel glycoconjugates, most of which have a biotechnological potential that remains unexplored.

The work results from an international collaboration between the CIB-CSIC and the Institute of General Organic Chemistry (IQOG-CSIC), both belonging to the National Spanish Research Council (CSIC), and the University of British Columbia (UBC).