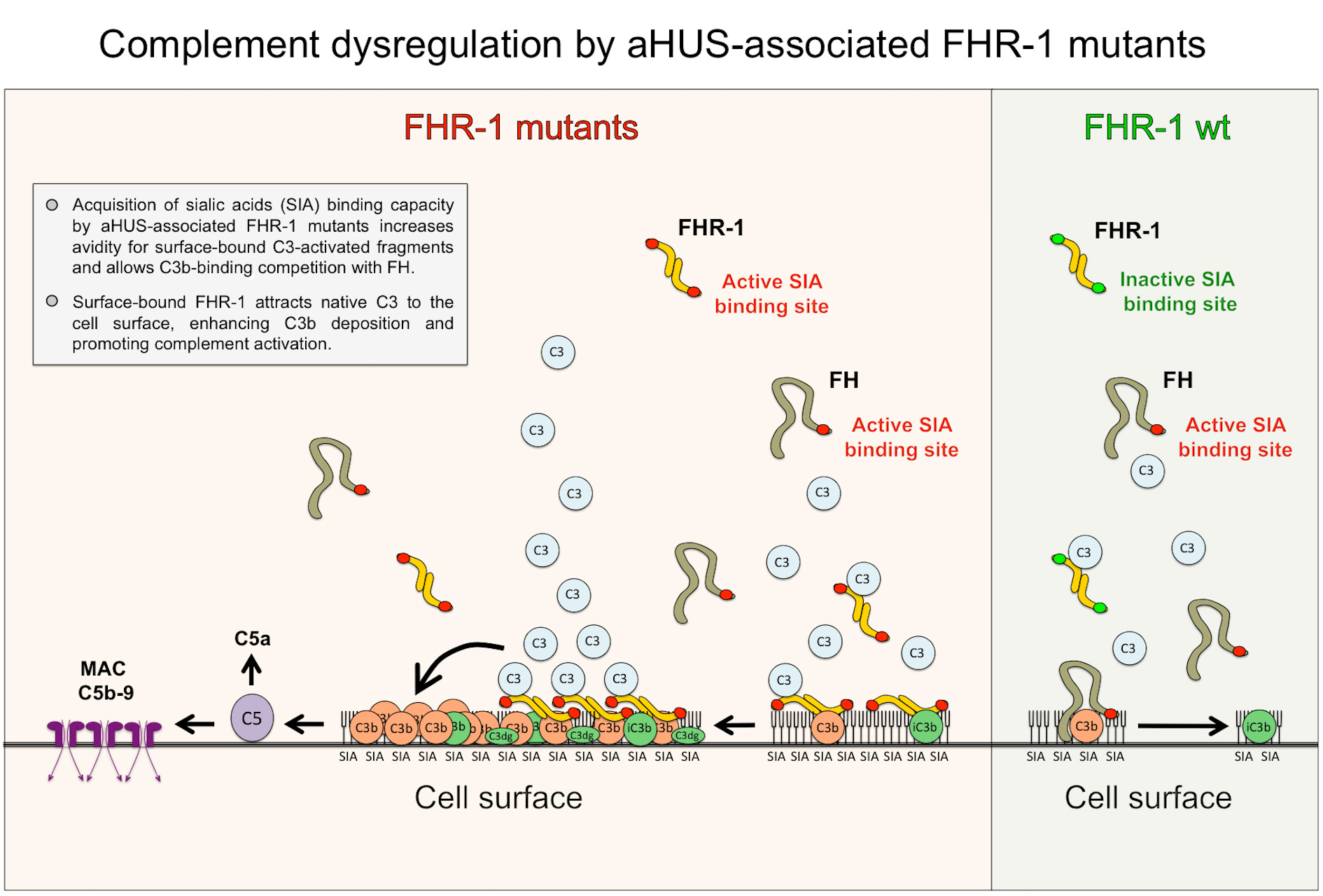 A new work published in the journal Blood by the group of Prof. Santiago Rodríguez de Córdoba at the Centro de Investigaciones Biológicas Margarita Salas (CSIC) provides novel data about the role of the complement protein FHR-1 in health and disease, giving explanation to the association of FHR-1 variations with aHUS and other complement-related pathologies.

FHR-1 is a remarkable complement protein that associated with the atypical hemolytic uremic syndrome (aHUS) and other important diseases such as Age-related macular degeneration, IgA-Nephropathy, or C3-glomerulopathy, which is only partially characterized. Previous knowledge postulated that FHR-1 is a competitor of the main complement regulator factor H (FH), but it failed to explain how the potential harm of this competition to host tissues is prevented.

Martín-Merinero et al. have characterized a series of FHR-1 mutants (including two associated with aHUS) by using a combination of biochemical, immunological, nuclear magnetic resonance, and computational approaches. They demonstrate that the postulated role of FHR-1 as a competitor of FH is only true for the aHUS-associated FHR-1 mutants and that this is because these mutants have acquired the capacity to bind sialic acids. This increases FHR-1 avidity for C3-activated fragments deposited in host cell surfaces and results in C3b-binding competition with FH.

Whilst C3b-binding competition with FH is limited to the aHUS-associated FHR-1 mutants, the authors also show that all surface-bound FHR-1, including wild type FHR-1, promote complement activation and that this promotion is delimited by the FHR-1/FH activity ratio. Additionally, they provide convincing evidence that the mechanism by which surface-bound FHR-1 promotes complement activation is the attraction of native C3 to the cell surface.

The work is the result of a collaboration between the CIB Margarita Salas groups of Profs. Rodríguez de Córdoba, Javier Cañada and Sonsoles Martín-Santamaría, with the Nefrology Service of the University Hospital of A Coruña, the Department of Immunology of Complutense University and the Research Institute Hospital 12 de Octubre (imas12). Santiago Rodríguez de Córdoba and Javier Cañada are also members of CIBERER and CIBERES, respectively.