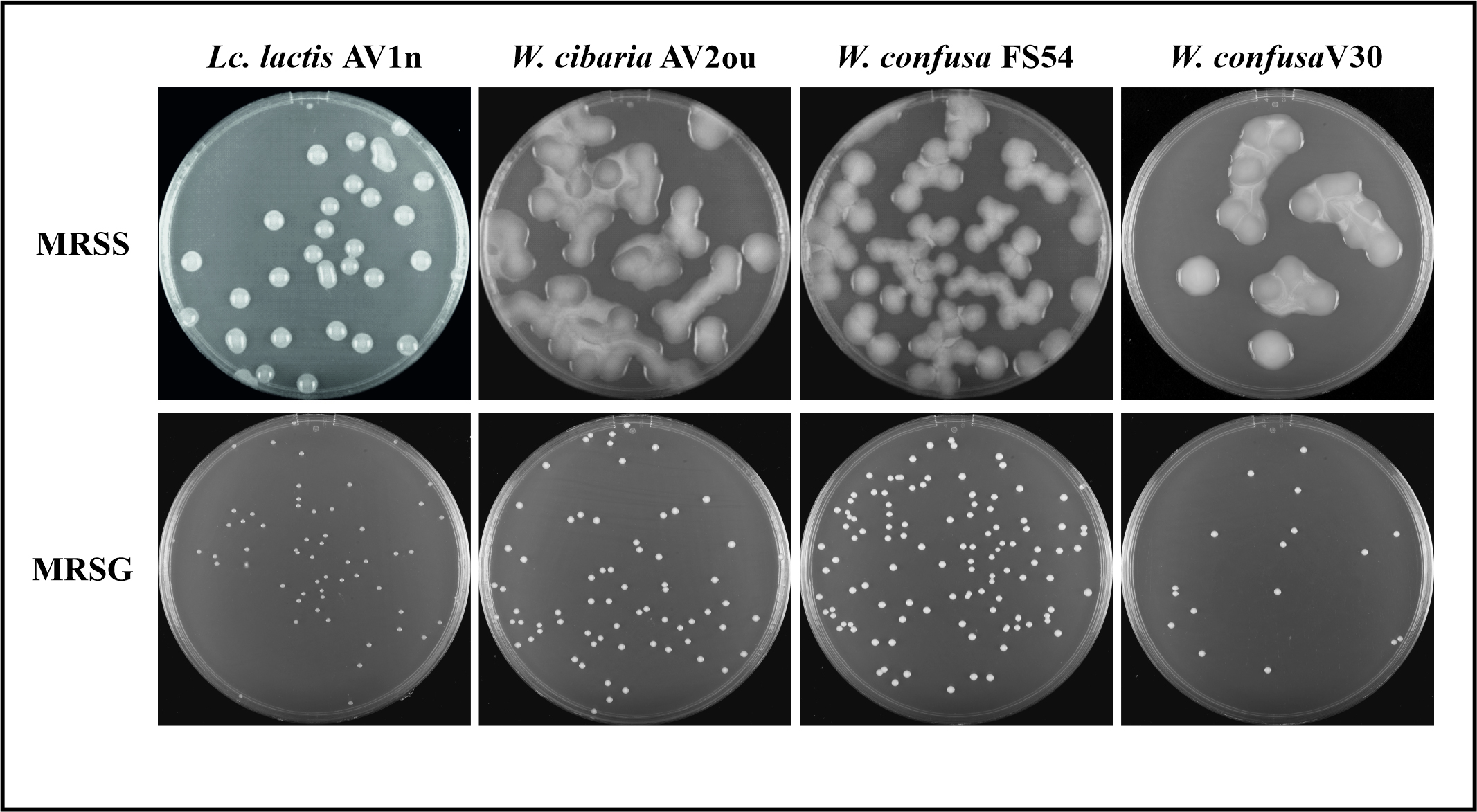 Detection of dextran production on solid media by the indicated LAB. Appearance of bacterial colonies after growth on MRSS-agar or MRSG-agar for 48 h at 30 ºC [Adapted from Carbohydrate Polymers (2021)]]
The role of dextran production in the metabolic context of Leuconostoc and Weissella Tunisian strains

A study recently published in the journal Carbohydrate Polymers by the “Molecular biology of Gram-positive Bacteria” group, led by Dr. Paloma López at the Margarita Salas Center for Biological Research (CSIC), presents the role of dextran production in the metabolic context of lactic acid bacteria belonging to the Leuconostoc and Weissella genera.

Lactic acid bacteria (LAB) are a heterogeneous group of gram-positive bacteria, traditionally used in food fermentation and preservation. Their usage has been expanded to the manufacture of functional food since, during fermentation, these LAB produce beneficial compounds such as lactic acid, aroma compounds, vitamins, antimicrobial agents, and exopolysaccharides (EPS). These compounds are classified as “generally recognized as safe” by the USA food and drug administration.

LAB includes, among others, the Leuconostoc and Weissella genera, which are heterofermentative bacteria that are closely related in their phenotypic characteristics and belong to the Lactobacillaceae, family. Some of these strains produce dextran-type homopolysaccharides (HoPS). Dextrans are α-glucans (polysaccharides derived from the polymerization of glucose) that contain a chain of α-(1–6) linked D-glucopyranose unit with varying percentages of α-(1-4), α-(1-3), or α-(1-2) branches. Dextrans have various uses in the food and pharmaceutical industries, among others, since their diversity in the degree and type of branching, and chain length, confers a wide variety of properties. Previous papers of Dr. López’s group have shown that high molecular weight dextrans synthesized by LAB have antiviral activities against RNA viruses as well as immuno-stimulatory effects potentiating, in a fish in vivo model the synthesis of interferon (IFN) types, IFN-1 and IFN-gamma.

All this information will contribute to better use of Weissella and Leuconostoc strains as probiotics, demonstrating a positive influence between dextran and the adhesion and aggregation properties of a bacterium and for the development of new functional foods.

The work is the result of a collaboration between the CIB-CSIC (Madrid), the University of El Manar (Tunisia), and the Instituto de Productos lácteos de Asturias IPLA (Asturias) and was supported by the Spanish Ministry of Science, Innovation, and Universities (grant RTI2018-097114-B-100) and the Tunisian Ministry of Higher Education and Scientific research.