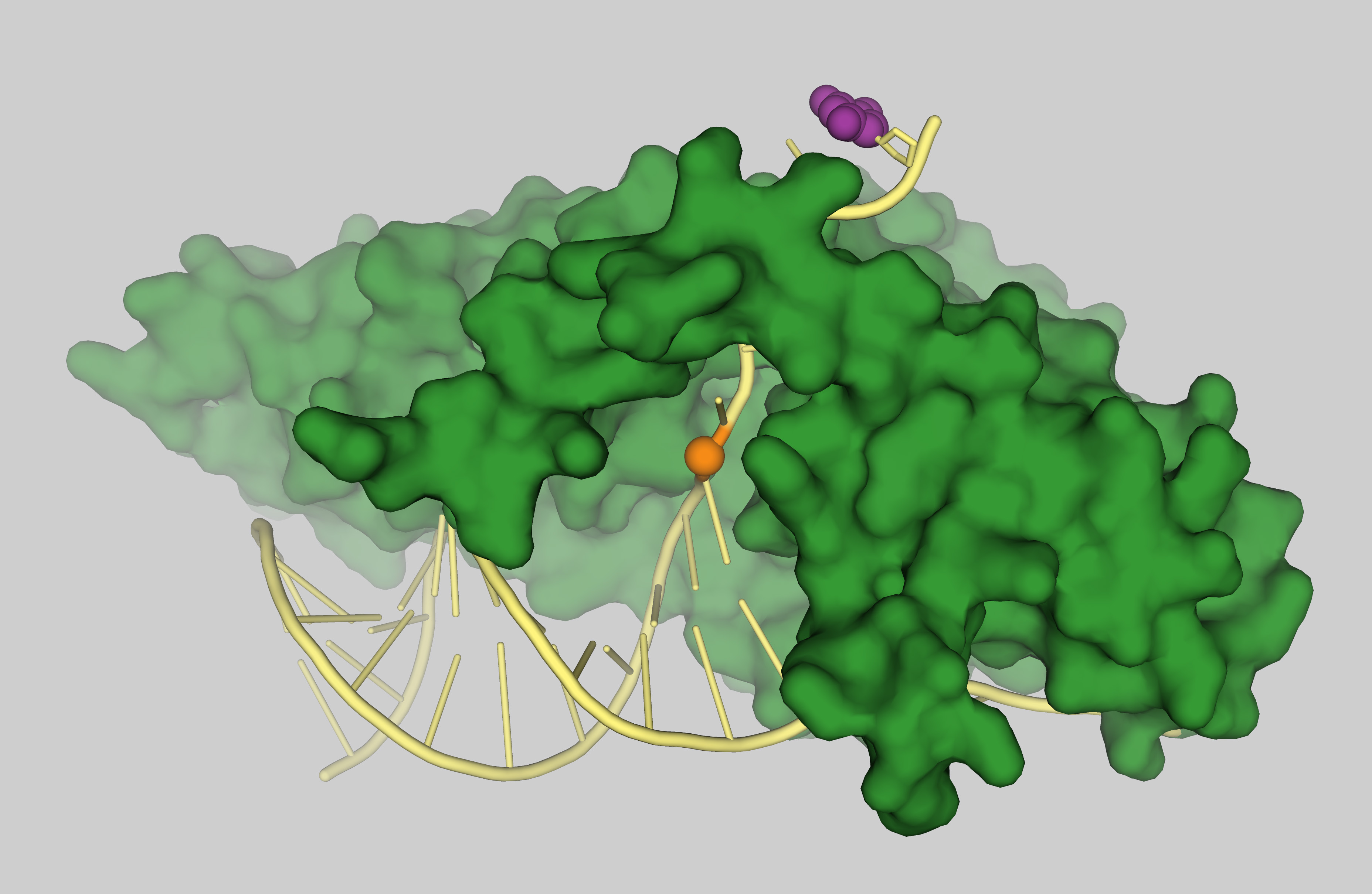 Model of the XPG enzyme (green) positioned on a DNA (yellow) containing a lesion (purple). It represents the moment prior to the removal of the fragment containing the lesion by cutting the cleavable bond (orange). /CIB-CSIC
The structure of the protein that eliminates DNA lesions produced by ultraviolet light or chemotherapy revealed

A team from the Margarita Salas Center for Biological Research, of the National Spanish Research Council (CSIC), has identified the mechanism that cells use to repair DNA after damage caused by ultraviolet radiation present in sunlight or by chemotherapeutic agents. The results of the study, led by Dr. Carlos Fernández Tornero and published in Nucleic Acids Research, pave the way to understand cell resistance to these DNA lesions.

Xeroderma pigmentosum, also known as “children of the moon” disease, is a genetic syndrome caused by malfunction of the proteins involved in the repair of bulky lesions affecting one of the two DNA strands. The XPG enzyme, object of the study, plays a fundamental role in the repair of these lesions and, thus, its dysfunction may lead to mild forms of the disease, associated to development of skin tumors after sunlight exposure, or to severe forms that cause neurological disorders or early death.

"DNA damage threatens cell life and must be repaired to maintain genome integrity", explains researcher Federico M. Ruiz, a participant in the study. “Among the most common DNA lesions are those caused by exposure to ultraviolet light. In addition, several anticancer drugs act by causing lesions that lead to tumor cell death, while the other cells end up repairing their DNA”.

In the final stages of the repair process of such lesions, the XPG enzyme cleaves the damaged DNA strand and allows its elimination, so "its correct activity and regulation are essential to protect us from moderate doses of sunlight and other cytotoxic agents", states Sonia Huecas, member of the research team.

The results of this work, funded by the Spanish Ministry of Science and in collaboration with the biotech PharmaMar, reveal the atomic structure of the XPG enzyme, both isolated and bound to its DNA substrate. This allowed the researchers to identify protein regions involved in DNA cleavage. Furthermore, a mutational study uncovered the amino acids implicated in the correct positioning of the damaged DNA within the enzyme’s active site, constituting a pre-requisite for DNA cleavage activity.

“Altogether -concludes Dr. Fernández-Tornero, director of the work- these findings unveil the molecular basis of xeroderma pigmentosum and deepen our understanding of the mechanisms that cells use to endure DNA damage, thus facilitating future applications in the field of biomedicine”.