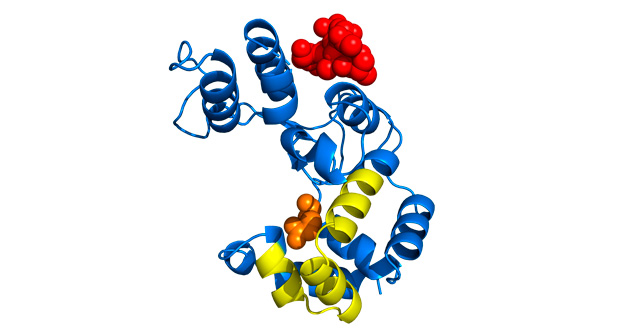 Ribbon-representation of the lysin Pae87 structure. The sequence corresponding to the P87 peptide is in yellow, the catalytic Glu29 residue in orange and the rest of the protein in blue. The bound peptidoglycan fragment is in red.
Functional and structural studies of an antibacterial enzyme reveal binding and activity subdomains

The most recent estimates indicate that antibiotic-resistant bacteria already cause more than one million deaths per year worldwide. In this regard, phage lysins that degrade bacterial peptidoglycan are a promising source of new antimicrobials active against antibiotic-resistant bacteria. Engineering these lysins is a technological strategy with the revolutionary potential to introduce a more precise or personalized approach to delivering antimicrobial therapy. These protein engineering efforts will require, however, a better understanding of the structure and function of lysins.

This article describes biochemical studies, carried out mainly by Dr. Roberto Vázquez at CIB-CSIC, and structural studies, by Dr. Mateo Seoane at CNB-CSIC, of lysin Pae87. These studies have shown that this protein possesses muramidase enzymatic activity, capable of degrading the glycan chains of the bacterial cell wall peptidoglycan, and the specific amino acids involved in this catalytic activity have been characterized. However, the bactericidal activity of exogenously added Pae87 was not associated with catalytic activity, but with a non-enzymatic activity on the membranes of Gram-negative bacteria, which most probably resides in a cationic and amphipathic peptide at the C-terminal region called P87. It has also been shown that the P87 peptide alone exhibits potent antibacterial activity.

The high-resolution crystal structure of Pae87 in complex with a peptidoglycan fragment showed a separate substrate-binding region within the catalytic domain itself. This substrate-binding region is conserved among related lysins lacking an additional cell wall-binding domain, but not among those containing such a module, and thus may serve a compensatory evolutionary function.

In short, this study analyzes several of the functional elements present in the structure of the Pae87 lysin and highlights that the functional outcome of this type of protein emerges from a series of complex mechanisms that may include collaboration between various activities within the protein, without catalytic activity necessarily being the most obvious or the most relevant. These results open the way for future efforts to design and obtain antimicrobials based on phage lysins, not only by modifying the whole enzymes but also by deriving small antimicrobial peptides from their structure.