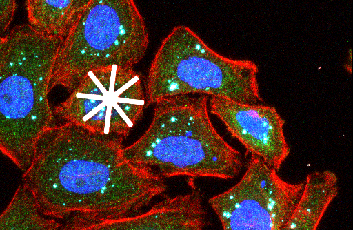 An investigation recently published in the journal Advanced Materials and led by Teresa Suárez, a researcher at the Margarita Salas Center for Biological Research (CIB-CSIC), shows that living cells are capable of internalizing nanometer-thick silicon microdevices with diameters similar to the cells themselves. The study, carried out jointly with the Institute of Microelectronics of Barcelona (IMB-CNM-CSIC), shows that these devices are capable of interfering with the cell cycle, preventing division and causing cell death, and proposes the use of these novel tools for approaching cell biology from a new perspective, as well as their possible use as drugs.

Generally, the blocking of the mitosis, which results in two daughter cells, is done with drugs such as taxol. This work proposes the use of mechanical, and not chemical, tools that can modify cell behavior, opening new avenues of exploration in the field of nanomedicine.

Arjona et al. have designed silicon microdevices with controlled shapes, dimensions, and rigidity, at the scale of microns and nanometers, which have been internalized by HeLa cells. The study shows that a priori non-phagocytic cells can internalize physical objects with diameters similar to those of the cells themselves, which constitute an intracellular mechanical obstacle that can alter the correct alignment of chromosomes and the mitotic spindle during the cell division process, thus inducing cell death.

"These devices modify the normal functioning of cells and can cause the death of the cells that internalize them so that, conveniently directed at a specific cell population, such as tumor cells, they could be used for their selective destruction without affecting the rest", says Teresa Suárez, co-director of the study. Likewise, she adds, "they will favor exploring cells from innovative angles, contributing to a better understanding of cellular processes."

One of the great advantages of these devices is that they can be designed with different shapes, dimensions, and rigidity, parameters that will determine the mechanical damage produced in the cells. "In particular, the manufactured devices are star-shaped or disc-shaped, with a diameter of 22 µm and thicknesses ranging from 50 to 500 nm", explains José Antonio Plaza, a researcher at the IMB-CNM-CSIC and co-director of the work.

This research demonstrates how physical objects, in this case, microchips, mechanically interfere with the cell cycle and alter it. "Our research also shows that these tools can be used to measure forces and perhaps, with other geometries, will allow the analysis of cell functions from a new perspective, being a novel starting point for the study of many diseases, such as cancer", indicated Patricia Vázquez and Alberto Hernández-Pinto, members of the CIB research team.

The devices have been developed in the Micro and Nanofabrication Clean Room of the IMB-CNM-CSIC, a Singular Scientific and Technical Infrastructure (ICTS) of the Ministry of Science and Innovation.