Tubulin is a major constitutive protein in cells, responsible of key canonical functions through its assembly into microtubules. These filaments control chromosome segregation during cell division, cell scaffolding, intracellular transport of particles and chemicals and, neural plasticity through static (main roads) or dynamic (mechanical forces) behaviours. Because tubulin develop these essential functions in every single type of eukaryotic cell, it turned into an ideal target for poisoning predators in nature, and many organisms have evolved to produce compounds able to block the activation/deactivation switch of tubulin. This has resulted in a plethora of natural products that binding to different pockets within the protein, can modulate tubulin assembly into microtubules. Some of these tubulin modulators are included in the WHO “essential medicines” such as, mebendazole, paclitaxel, and vinca derivatives that have saved million lives both in first world and in developing countries.

Among the global health challenges there are three in which tubulin modulation may offer a productive approach for pharmacological development: A) Neurodegenerative diseases (chemically stabilize microtubules for the treatment of taupaties), B) Cancer (necessity of novel microtubule modulators that stop cell division and produce vascular collapse in tumours but do not induce peripheral neurotoxicity), and C) Viral infections (microtubules are essential for viral transport to the cell factories and egression). Although compounds targeting tubulin are by nature toxic and, it is possible to find a therapeutic window for these applications exploiting the differences in the time scale of the processes involved, and the tubulin concentration in neurons.

In the past, we have contributed to the development of biochemical, biophysical and cellular tools essential on the characterization of any tubulin modulator. Currently, we are implementing these and introducing novel approaches in our pipeline in order to improve our understanding on the mechanism of action of these modulators. Our present and future research lines pretend to obtain knowledge on:

-Cellular and molecular mechanisms of the regulation of tubulin cytoskeleton, so we can find better and safer ways to pharmacologically modulate it.

-Cellular and molecular mechanisms of action of microtubule modulating agents, to unveil how they exert their effects and why and how induce undesired secondary effects, so we can design, synthesize and test better drugs.

-The implication of microtubules and other cytoskeletal proteins hyper-exploited in viral infection, so they can be pharmacologically targeted to treat viral infections. These drugs would be wide spectrum antivirals able to avoid the main viral mechanism of resistance to chemical toxicity (genetic mutations).

Nowadays our investigation focus on the following specific objectives: 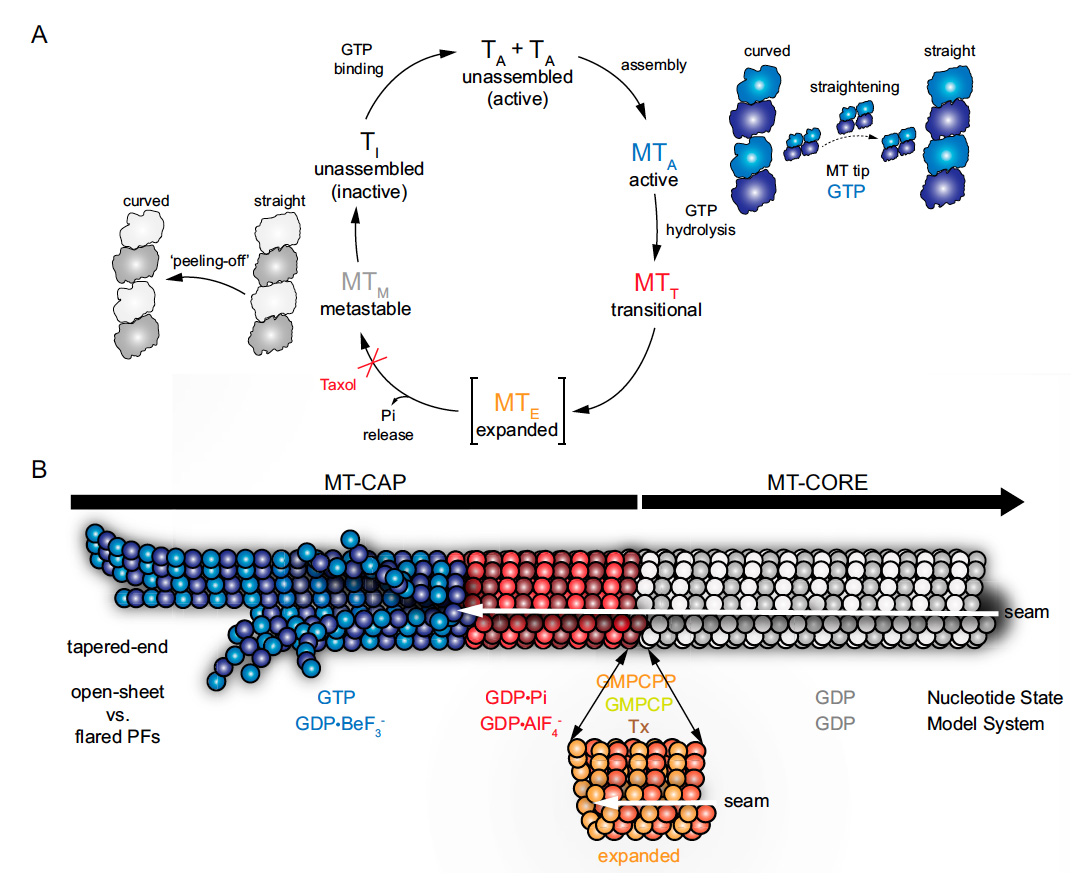 Figure: Cap model derived from microtubule (MT) model systems. GTP-bound state (BeF3-, blue), transition state (AlFx, red), expanded state (GMPCPP, GMPCP, GDP-Px, orange), and GDP-bound state (gray). A. Schematic GTPase related conformational changes within the MT lattice. Tubulin activation upon GTP binding (TA) induces polymerization. During assembly (MTA), the formation of lateral contacts favors tubulin straightening, which allows GTP hydrolysis. GTPase activity drives MT through a transitional state (MTT), where the Pi is at the nucleotide-binding site before it is released. Expansion (orange) may be an intermediate transient step between GDP·Pi and GDP states, which may facilitates Pi release (MTE) and would be blocked in the presence of taxol. GDP-MT (MTM) shrinks through a ‘peeling-off’ disassembly in which tubulin reverts to the curved conformation, which is inactive (TI) in the GDP-bound state. B. MT model illustrating specific lattice features of the GTPase cycle. This mosaic structure shows that: (i) the GTP-bound tip (blue) contains curved PFs/sheets that come together into a straight lattice due to the formation of lateral contacts, (ii) the post-hydrolysis GDP·Pi lattice (red) retains overall MT structure, (iii) hypothetically, lattice undergoes an energy-consuming expansion phase (orange) that contributes to Pi

Currently no information is available