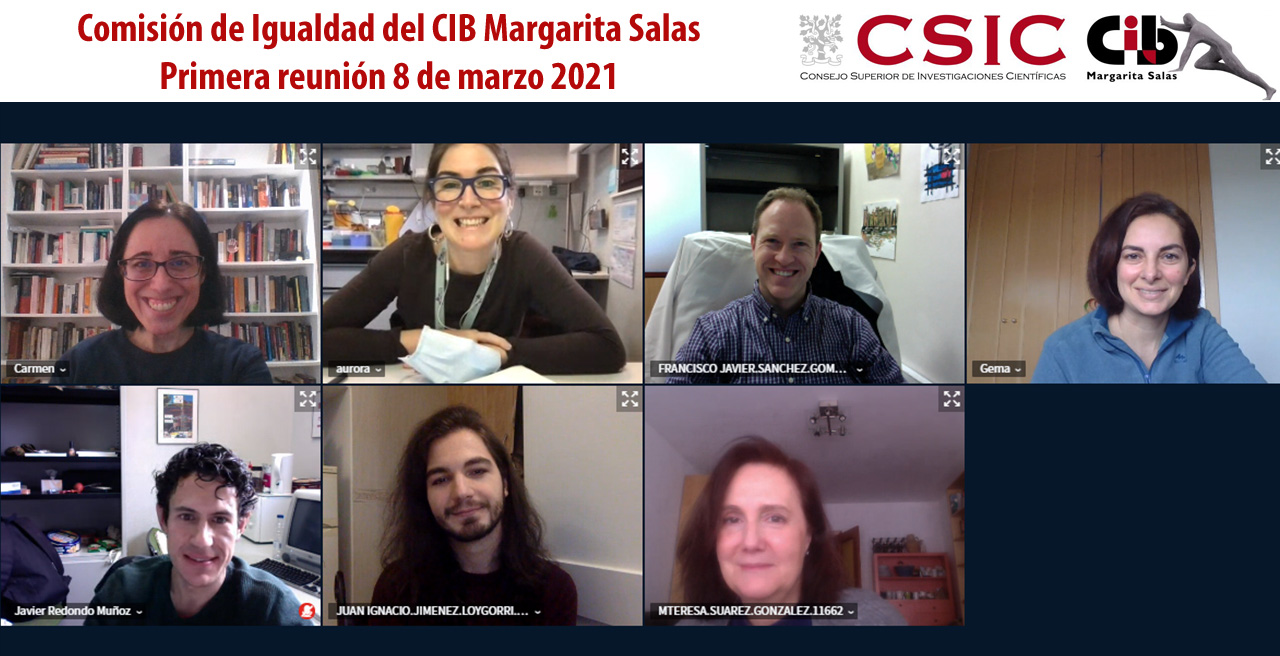 The Margarita Salas Center for Biological Research has created a new Equality Commission in February 2021. Ratified by CIB’s Executive Board, the commission is made up of 7 members from the different scientific and administrative scales at CIB and has the mission to promote gender mainstreaming in the institute and to implement measures to achieve the transversal principle of equality between men and woman. The first meeting of the Equality Commission has been held on March 8, 2021, within the commemoration of International Women’s Day.

The main objectives of the Equality Commission are:

• Promote the presence of women in research laboratories, with active recruitment policies for young female scientists, leaders of the group, and in the center's governing bodies (management team, department heads). Contribute to the visibility of our female researchers.

• Contribute to the promotion of vocations within the STEMM disciplines.

• Contribute to dismantle gender biases and stereotypes, as well as to supervise the proper inclusion of gender when designing research projects.

For more than 15 years, CIB Margarita Salas presents sex-disaggregated statistics in the institute, and all committees and selection boards at CIB meet parity criteria. More recently, CIB has taken steps to comply with the current regulation for maternity/paternity leave, supporting the optimal conditions for pregnant women at work and offering a private breastfeeding room. A specific protocol against sexual harassment has been implemented and awareness of gender misbalance has been aroused in the institute. CIB researchers have always been part of the CSIC Commission of Women in Science, a pioneer committee in Spain formed in 2002 (Flora de Pablo 2002-2014 and Teresa Suárez, 2014-present). The guidelines and politics defined by this Commission, which has been declared “good practice example” by Science Europe in November 2020, have been implemented at our institute through the years.

Female researchers at CIB-CSIC actively participate in STEMM and mentoring programs, annual campaigns of visibility of women scientists (February 11, International Day of Women and Girls in Science, and March 8, International Women's Day), presenting lectures in schools, and institutes and participating in events specifically designed to celebrate these commemorations.

Moreover, it is remarkable the prominent role of our researcher Dr. Flora de Pablo, Spanish referent of the visibility of the role of female scientist and tireless worker for their rights for more than 25 years, who participated in the creation of the CSIC Women in Science Commission in 2002, and the foundation of AMIT (Women and Technologist Association) in December 2001, being its first president. Among other exceptional contributions, she has collaborated for more than 15 years with the program "For Women in Science" of L'Óreal-UNESCO.