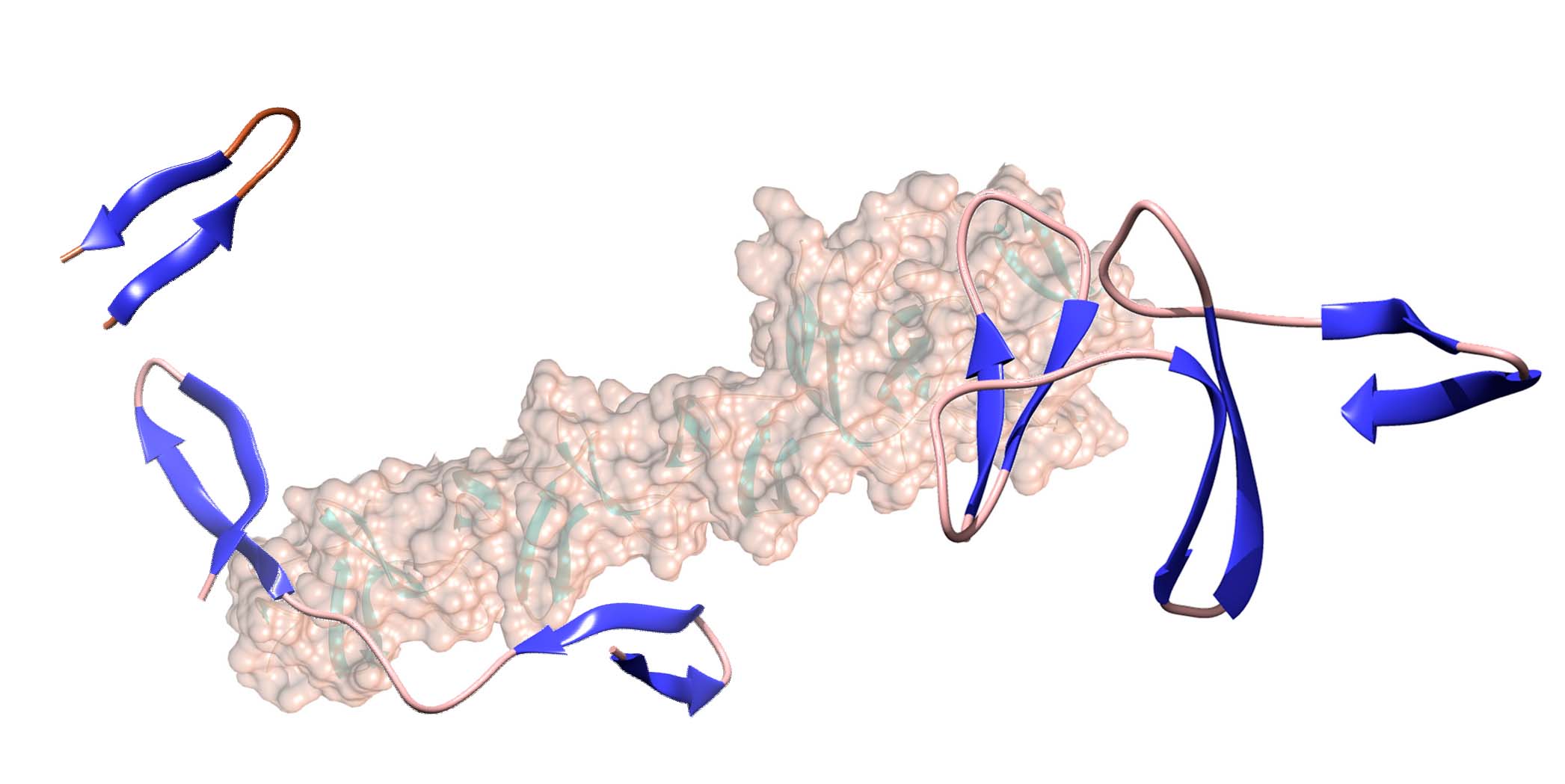 A work recently published in the International Journal of Biological Macromolecules by Dr. Jesús Sanz's group at the Margarita Salas Center for Biological Research (CIB-CSIC), in collaboration with the group of Dr. Ma Ángeles Jiménez (Instituto de Química Física Rocasolano, CSIC), demonstrates that a minimum of three repeated motifs is required for a choline-binding module to acquire the native ββ-solenoid-type structure. The CSIC researchers have also identified that the linker sequences between the hairpins are the main directors of the solenoid folding.

The standard ββ-solenoid structure is a protein folding mode that consists of the repetition of 12-residue β-hairpins along a superhelix with three elements per turn. These hairpins are linked together by connectors of 7-9 amino acids, in a kind of spiral staircase with three steps per turn in which these connectors would act as handrails.

Previous work by the authors demonstrated that isolated β-hairpins can acquire the native structure in solution, independently of the rest of the protein, although it remained to be determined what it would take for these hairpins to rearrange one another to give rise to the superhelix.

Now, Maestro et al. have carried out the theoretical, spectroscopic, and thermodynamic study of a series of peptides that contain between one and three hairpins with their corresponding linkers, and which constitute the minimum versions of the ββ-solenoid choline-binding module of the autolysin LytA of the pathogen Streptococcus pneumoniae (pneumococcus). The results show that three of these elements are necessary for the structure to form and the sequences which connect them direct their folding. Furthermore, it provides a structural explanation for the existence of N- and C-terminal sequences external to the ββ-solenoid but essential for its stability.

The ββ-solenoids contain ligand binding sites between steps, making it possible for several molecules to bind simultaneously, inducing compaction of the structure. This multivalence makes them very suitable for binding to polymeric substrates, which Dr. Sanz's laboratory has used for the development of affinity tags for the immobilization and purification of proteins in marketed kits.

The study opens the way for the rational design of other structures of the ββ-solenoid type with new applications, by means of mutations in the linker sequences, with a view to creating an "à la carte" recognition system of polymeric structures, for example, those belonging to the surface of different microorganisms, with relevant theranostic applications.

2021 marks the 20th anniversary of the publication of the first ββ-solenoid structure, the C-LytA module, which was described by the CIB Margarita Salas researchers Carlos Fernández Tornero, Rubens López, Ernesto García, Guillermo Giménez, and Antonio Romero, demonstrating the tradition of this research center in the study of these characteristic proteins.