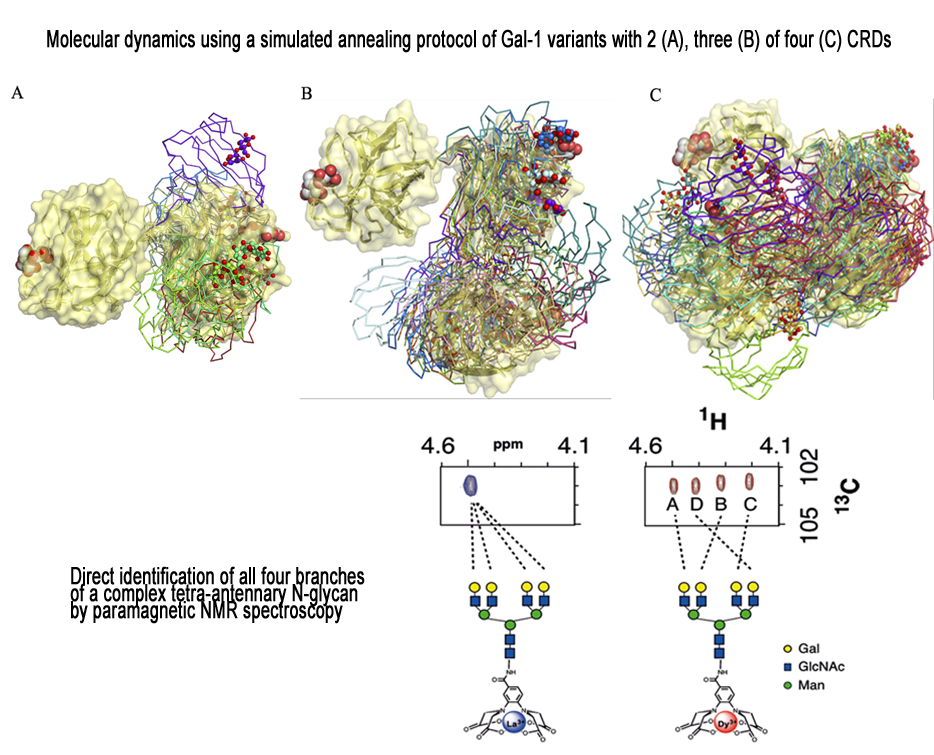 Carbohydrates play an important role in many biological processes and recognition of these ligands mediates a large number of natural and pathological events. Knowledge of both the structure of the sugars and the receptors which interact with them, as well as the one of the constituted complexes, is very important as regards the design of drugs.

Two studies recently published in Angew. Chemie Int. Ed. Engl., one of the most prestigious journals in general chemistry, with the collaboration of CIB groups belonging to the Chemical and Physical Biology Department provide different strategies addressed towards unveiling the process of recognition of carbohydrates from different perspectives.

In one of them, an international team led by Dr. A. Canales (UCM) and Dr. J. Jiménez-Barbero (CICbioGUNE), both former members of the NMR and Molecular Recognition Group at CIB now directed by Prof. J. Cañada, makes a big step towards the structural characterization of the biological recognition of complex-type N-glycans, still unsolved but key to many physiological and pathological events. The inherent flexibility of N-glycans and the chemical equivalence of individual branches preclude their precise characterization. By using a chemoenzymatically synthesized tetra-antennary N-glycan conjugated to a lanthanide binding tag, the NMR signals under paramagnetic conditions allowed to discriminate with unprecedented resolution all four N-acetyl lactosamine antennae. The NMR data, mostly acquired at CIB, revealed the conformation of the studied N-glycan and permitted for the first time the direct identification of individual branches involved in the recognition by two lectins, Datura stramonium seed lectin (DSL) and Ricinus Communis agglutinin (RCA120).

On the other hand, the group of Structural Biology of Proteins led by Dr. A. Romero participates, together with an international team, in the characterization of a programmable glycan presentation of glycodendrimersomes and cells, using engineered human lectins to show sugar functionality of the cell surface using the homodimeric adhesion/growth-regulatory galectin-1 and a set of covalently linked homo-oligomers from di- to tetramers serve as proof-of-principle test cases. The study uses a combination of synthetic and biological tools as well as molecular dynamics simulations, which were performed by the group at CIB. All together, the results led to fundamental insights into the activity profiles of the homo-oligomers relative to the WT protein, which could become the starting point for developing innovative scavengers of infectious bacteria/disease-related galectin presence.