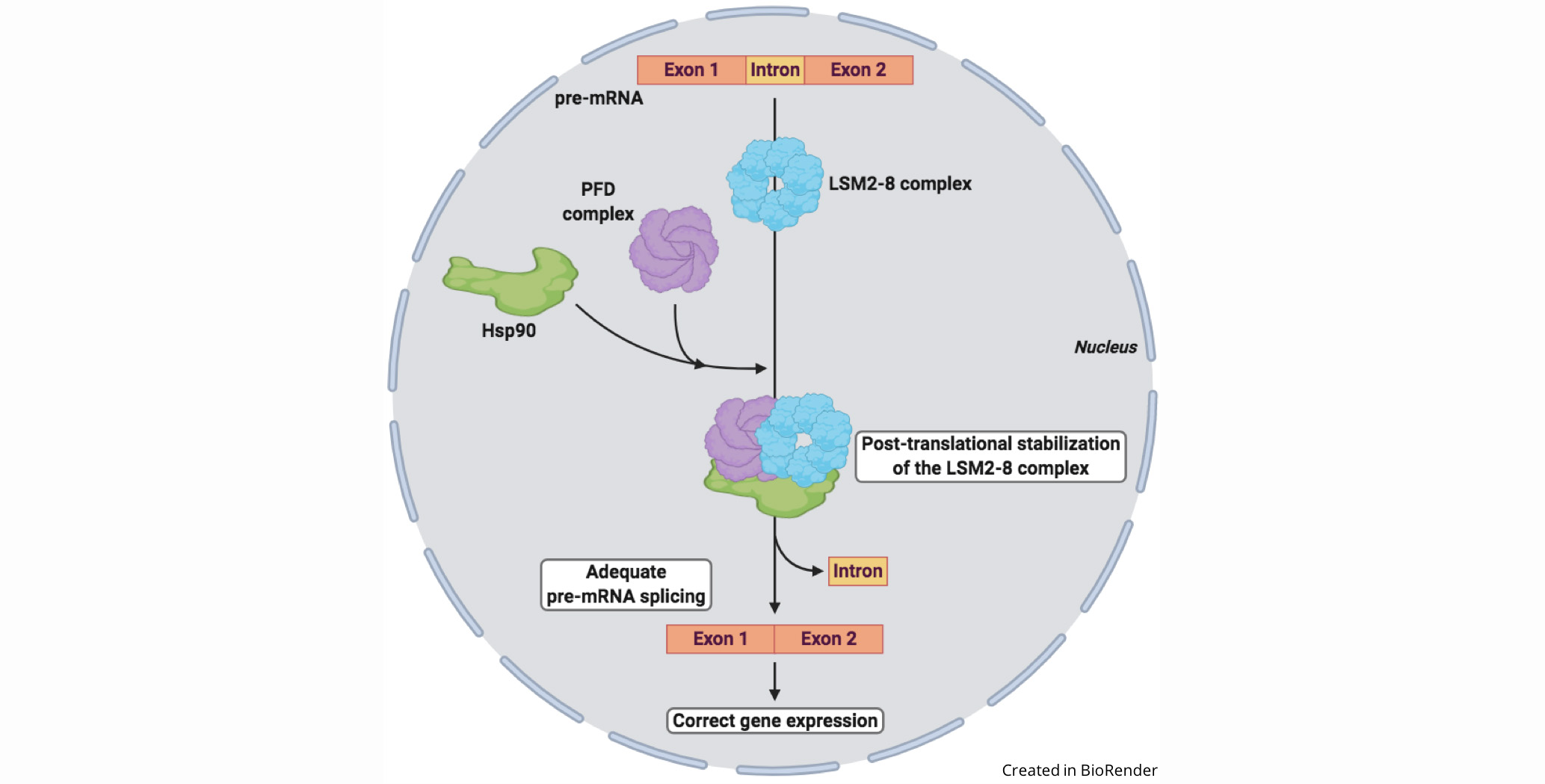 A new work published in Nucleic Acids Research by the group of Prof. Julio Salinas at Centro de Investigaciones Biológicas Margarita Salas has demonstrated that prefoldins, a family of proteins that help others to fold, maintain the adequate levels of the LSM2-8 complex in Arabidopsis, mediating the interaction between the LSM8 protein and the chaperone Hsp90, ensuring its stability and the proper spliceosome function.

Pre-mRNA splicing is a crucial step in gene expression in eukaryotes which is carried out by the spliceosome, a large machinery formed by the association of five small nuclear ribonucleoproteins (snRNPs), that constitute its core, and more than 200 associated proteins. Each snRNP, in turn, is composed by one snRNA and its corresponding interacting proteins. The Sm-like (LSM) proteins form a heteroheptameric complex, the LSM2-8, that specifically interacts with the U6 snRNA, ensuring its stability and cellular levels. Taking into account the role of U6 in the catalytic reaction that takes place in the splicing, the regulation of the LSM2-8 complex stability is critical for proper spliceosome function and correct gene expression.

In this study, Esteve-Bruna et al. demonstrate that the LSM8 protein, which defines and confers the functional specificity of the LSM2-8 complex, interacts with the chaperone Hsp90 in Arabidopsis, and that this interaction ensures the stability of the LSM2-8 complex. Additionally, genetic and biochemical evidence shows that prefoldins (PFDs), which form a hexameric complex, mediate the LSM8-Hsp90 interaction. Consistent with these results and with the role of the LSM2-8 complex in splicing through U6 stabilization, Arabidopsis pfd mutants show reduced levels of this snRNA and altered pre-mRNA splicing patterns.

In summary, the results indicate that PFD activity is required to maintain the cellular levels of the LSM2-8 complex by mediating the interaction of LSM8 with Hsp90. The action of PFDs/Hsp90 represents a novel layer of post-translational regulation for the LSM2-8 complex that, given the elevated evolutionary conservation of PFDs and spliceosome components, might operate in other eukaryotes as well.