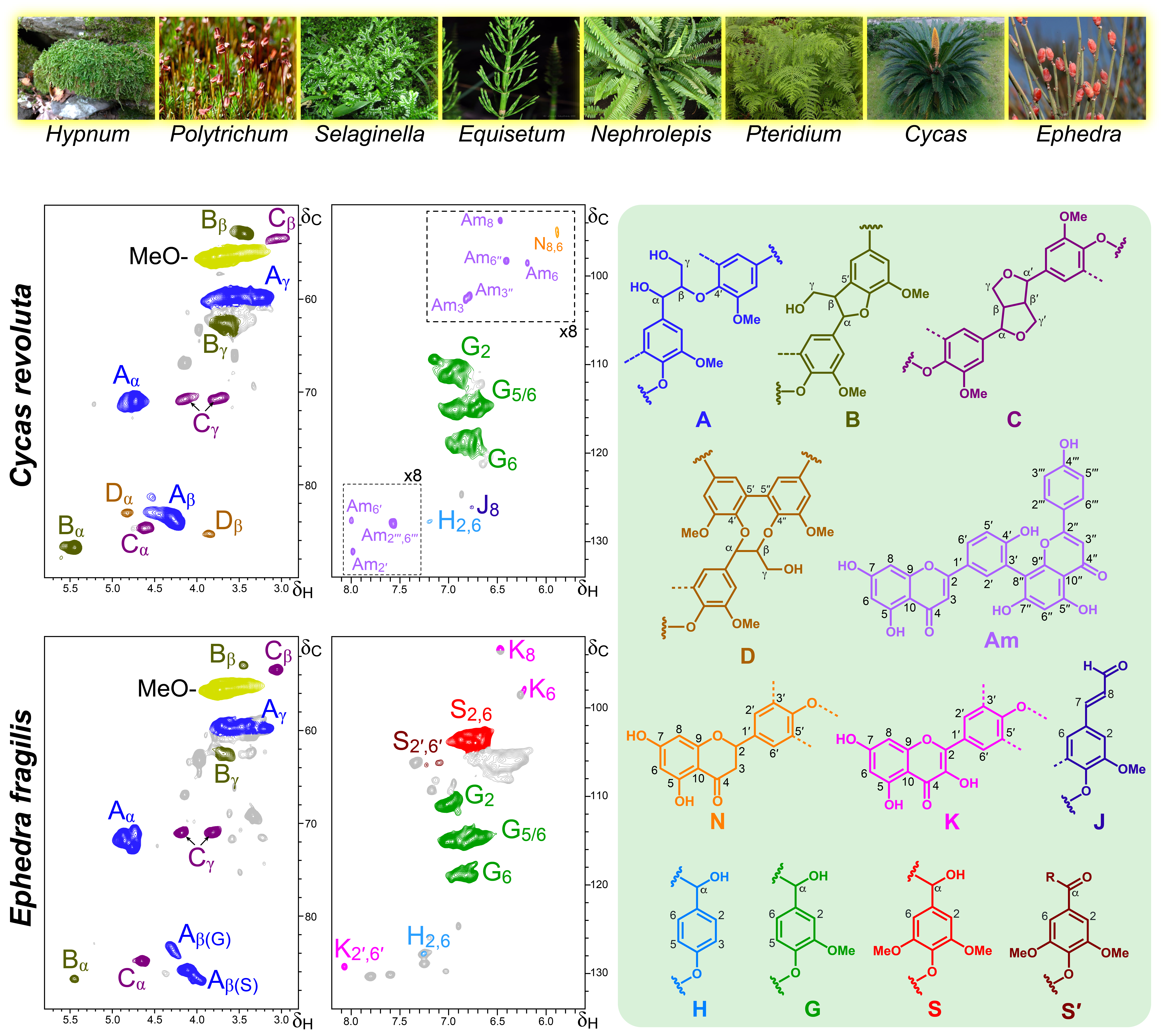 A new study recently published in the journal Frontiers in Plant Science by the group of Angel T. Martínez at the Margarita Salas Center for Biological Research, in collaboration with Jorge Rencoret at IRNAS, reveals the composition and structure of lignin-like fractions in primitive plants. The research focuses on the study of the evolution of the lignin polymer from the most ancient terrestrial plants, such as mosses, to more evolved primitive gymnosperms, by using advanced analytical techniques.

Py-GC/MS analyses revealed the abundant presence of characteristic markers of lignin units, except in the H. cupressiforme, P. commune, and E. palustre fractions; whereas 2D-NMR heteronuclear single quantum coherence (HSQC) experiments provided valuable additional structural information. 2D-NMR experiments displayed intense correlations signals of guaiacyl (G) units in the fern and cycad lignins, along with smaller amounts of p-hydroxyphenyl (H) units. Interestingly, the lignin-like fractions from the lycophyte S. kraussiana and the gnetophyte E. fragilis were not only composed of G- and H-lignin units but, due to convergent evolution, they also incorporated syringyl (S) units characteristic of angiosperms, which appeared much later in plant evolution. The most abundant linkages connecting these lignin units (and traces of coniferaldehyde end-groups, J) were identified as β−O−4' alkyl-aryl ethers (A), followed by condensed β−5' phenylcoumarans (B), and β−β' resinols (C) (together with 5−5' linkages forming dibenzodioxocin structures, D, in the fern and cycad).

Additionally, HSQC-NMR has allowed the identification of different flavonoid compounds never reported before in natural lignins, such as amentoflavone (Am), apigenin, hypnogenol B (only in H. cupressiforme), kaempferol (K), and naringenin (N). These flavonoids were highly abundant in the moss H. cupressiforme (whose lignin-like fraction contains 84% of hypnogenol B), and their abundance decreased in the fractions isolated from S. kraussiana (with amentoflavone and naringenin representing 14% of the total aromatic units), and the two ancient gymnosperms (0.4-1.2%) and ferns (0-0.7%).

Flavonoids and lignin-like polymers have existed concomitantly since the first land plants appeared. Due to their aromatic nature, they are believed to play a key role as UV screens during the colonization of the terrestrial environment; although the amount of flavonoids in the lignin-like fractions has been reduced as terrestrial plants have evolved. This fact is consistent with the detection of flavonoids within the lignin-like fractions of all the primitive plants studied here (from mosses to ancient gymnosperms). The provided evidence represents an important contribution to our knowledge of both types of molecules since, until now, only one flavonoid (tricin) was known to be able to be incorporated as a monomer to the lignin polymer (mainly in grasses and other monocots).

The work is the result of a collaboration of the researchers at CIB-CSIC and IRNA, together with the universities of Alcalá and Tokyo.