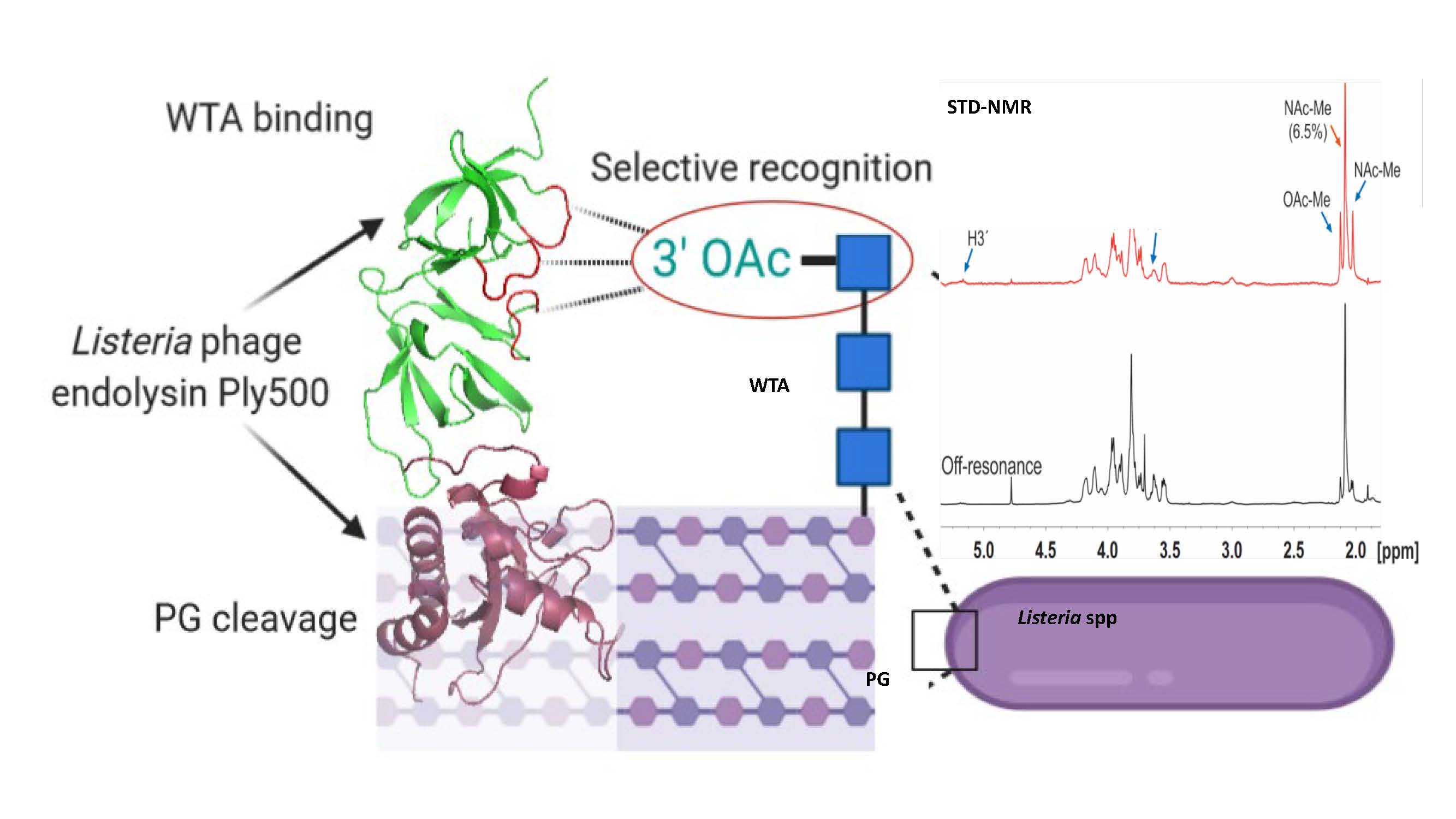 A recent international collaborative study with the participation of the group of NMR and Molecular Recognition headed by Dr. Javier Cañada at the Centro de Investigaciones Biológicas Margarita Salas (CIB-CSIC), has characterized the recognition of Listeria spp. wall-teichoic acid by a bacteriophage endolysin named Ply500. The work, recently published in the journal Chemical Science, has unveiled at the atomic level the previously unknown mechanism by which the phage endolysin selectively recognizes and targets wall teichoic acid from Listeria spp. by specifically interacting with 3´O-acetylated N-acetyl-glucosamine units of the teichoic acid chain.

Endolysins are peptidoglycan hydrolases able to degrade the cell-wall of bacterial hosts that in the past decades have emerged as extraordinary antimicrobial agents in our combat against multiresistant bacteria. They constitute an attractive playground for protein engineering since frequently their bacterial-wall recognition and peptidoglycan cleavage activity is performed by distinct modules. This is the case for Ply500 that, in addition to the hydrolase domain, includes a cell wall-binding domain (CBD), namely CBD500, comprising two copies of β-barrel, pseudo-symmetric SH3b-like repeats held together by means of swapped strands.

The study has integrated a wide variety of ligand- and receptor-based methods -covering from molecular biology, calorimetry, and crystallography to NMR, in combination with molecular modeling- to tackle an extremely challenging protein–glycopolymer complex. For the first time, atomic evidence is provided that swapped SH3b-like repeats of this Listeria phage endolysin permit the selective recognition of carbohydrate ligands, instead of binding to peptidoglycan-related moieties, as previously observed for this type of domains.

This multidisciplinary approach fosters the existing knowledge on glycopolymer recognition by endolysins, as well as on the diversification of the SH3b domain folding and binding site, suggesting an adaptable model for their specificity regulation.

The work, led by the Institute of Food, Nutrition, and Health of ETH (Zurich), is the result of an international collaboration where, in addition to the CIB Margarita Salas, participated the Rocasolano Institute of Physical Chemistry (CSIC), the Centro de Investigación Biomédica en Red-Enfermedades Respiratorias (CIBERES), the Laboratory for Biomolecular Modeling, EPFL (Switzerland), the Novo Nordisk Foundation Center for Protein Research, Faculty of Health and Medical Sciences, University of Copenhagen (Denmark) and the Sealy Center for Structural Biology and Molecular Biophysics, University of Texas (USA).

This article is part of the themed collection 2020 Chemical Science HOT Article Collection and was characterized as an Edge as well as Advance Article.