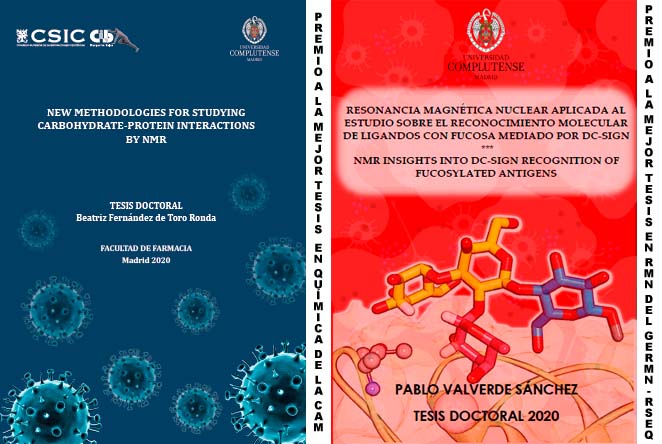 Beatriz Fernández de Toro Ronda, who did her doctoral thesis in the NMR and Molecular Recognition group of the Margarita Salas Center for Biological Research (CSIC), and Pablo Valverde Sánchez, whose thesis was co-directed by Prof. Javier Cañada, principal investigator from the aforementioned group, have received the Awards for the Best Doctoral Thesis in Chemistry of the Community of Madrid and the Award for the Best Thesis in Nuclear Magnetic Resonance (NMR) respectively. Both prizes have been awarded by the Spanish Royal Society of Chemistry (RSEQ), through its Madrid Territorial Section (STM) and its Specialized Group on NMR (GERMN). Both awards sum up to the one awarded by the Specialized Group on Carbohydrates (GEHiC) of the RSEQ to Juan Méndez-Liter's thesis developed at the CIB Margarita Salas in the group of Prof. María Jesús Martínez.

This thesis, defended at the Complutense University of Madrid (UCM) in 2020, focuses on understanding the conformation and dynamics of different saccharides and glycomimetics in solution, as well as deciphering the key characteristics of molecular recognition processes with their receptors, using NMR supported by computational models. As model systems, diastereomeric glycosyl sulfoxides were studied in interaction with the β-galactosidase of E. coli, as well as the key binding epitopes required for the recognition of N-glycans by the influenza A virus hemagglutinin, with the final objective to have a better understanding of the molecular basis of influenza virus infection. Additionally, and in collaboration with the group of Dr. María Jesús Martínez at the CIB Margarita Salas, an exhaustive NMR characterization procedure was carried out to elucidate the structure of a variety of carbohydrate-containing molecules, obtained by enzymatic synthesis. Beatriz Fernández de Toro's thesis has also been recognized with a second prize in the awards given by the Specialized Group of Biological Chemistry (GEQB) of the RSEQ.

Beatriz Fernández de Toro received her award at a ceremony held on September 29, 2021 at the University of Alcalá (UAH), chaired by the Vice-Rector for Research and Transfer, Francisco de la Mata, and where, in addition to the presentation of the awarded thesis, two second prizes were awarded to Roberto María Hormigos and Francisco José González, and Dr. María Luisa Marina Alegre (Professor of Analytical Chemistry at UAH) gave the conference "Sustainable strategies for chiral analysis and for obtaining bioactive compounds".

The thesis, presented at the UCM in 2020, addresses from a structural perspective, mostly using NMR, the recognition of antigens with L-fucose mediated by the DC-SIGN lectin, attending to those relevant aspects that, at the molecular level, help to understand how the interaction takes place and open a possible way to exploit this knowledge in drug development. In particular, the thesis has focused on describing the recognition of blood antigens A and B (both fucosylated), as well as two Lewis-type antigens (LDNF and LDN-DF) found on the glycoproteins of the S. mansoni parasite and which are also recognized by DC-SIGN. In addition, the selectivity of DC-SIGN has been studied using 19F-NMR techniques which allow deciphering the structural requirements necessary for a simple sugar to be recognized at the lectin binding site.

Along with Pablo Valverde's thesis, the one defended by Borja Mateos López, “The hidden order of intrinsically disordered proteins and its role in molecular recognition”, was also awarded by the GERMN. Both works will be presented at the next scientific meeting of the GERMN.