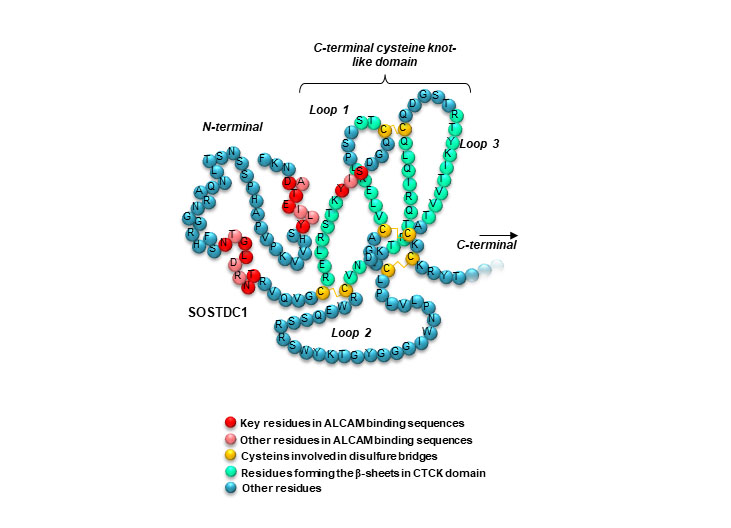 The group led by Dr. Ignacio Casal at the Margarita Salas Center for Biological Research has identified a new therapeutic target for the treatment of colorectal cancer. The work, published in the journal Oncogene, describes the role of the SOSTDC1 protein in the invasion and progression of liver metastasis in colorectal cancer.

Since tumor metastasis is responsible for more than 90% of cancer deaths, there is an urgent need to identify new therapeutic targets and develop new treatments that help curb this high mortality. In the case of colorectal cancer, the mechanistic bases of the liver colonization process are largely unknown.

The work of Bartolomé et al. presents a completely new and unexpected activity of the SOSTDC1 protein, which until now was only known by its inhibitory role of the bone morphogenetic protein, BMP4. Now, SOSTDC1 has been discovered to associate with the tumor stem cell marker ALCAM/CD166, a key protein in immune response, cell adhesion, and the tumor-extracellular matrix interaction, for promoting invasion and liver metastasis.

The results demonstrate that SOSTDC1-mediated activation of ALCAM involves the activation of SRC-PI3K/AKT signaling pathways through the interaction with β1 integrins, which promotes cancer progression. Furthermore, inoculation with cells silenced in SOSTDC1 leads to a clear increase in survival to liver metastasis in treated mice, thus supporting the therapeutic value of this protein.

Altogether, the study points out that SOSTDC1 could provide a new approach for the treatment of metastasis in colorectal cancer based on blocking its interaction with ALCAM, opening the way for the characterization of its therapeutic value. Furthermore, the ability of SOSTDC1 to compete with CD6, the ALCAM ligand at the immunological synapse, coupled with the overexpression of ALCAM in hematological tumors, suggests a possible extension of these findings to leukemias, lymphomas, and myelomas.